Rosencrantz and Ensign Ricky Are Dead 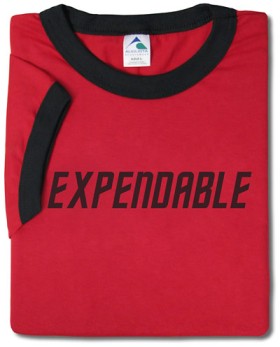 Last year David and I were lucky enough to hear one of my favorite authors read an excerpt from a forthcoming  untitled book. He told us that we were not allowed to tell anyone about the project and I got that geek thrill of being one of the few instead of the many. What we heard is the prologue to John Scalzi’s bestselling book, Redshirts. The prologue is an away mission encounter on a “typical science fiction show” from the point of view of the red-shirted security officer, who is killed at the end of the prologue. [Warning: I don’t think anyone finding this post will mind any spoilers so I don’t intend to warn you ahead of time. Based on current readership either you have already read the book or you probably never are going to.]

It was amusing and I liked the existential nature of a character realizing they are just a minor character. I remember thinking that it was going to be hard for him to make an entire novel out of this when any of the main characters would keep dying. Except they wouldn’t be main characters because then they wouldn’t be a “red shirt.” This is something that comes to light towards the end of the main story and true to the novel’s very meta nature it is acknowledged outright.

I really wanted to enjoy this book. John Scalzi really is one of my favorite authors. I am a fan of his work and based on what I know of him from his contributions to the intertubes (which is pretty extensive) he seems a decent fellow. Also I thought the concept of a…cough…trek among the stars…cough… from the point of view of a redshirt was great and I did laugh at many of the in jokes during the set up part of the story. The “black box” where all scientific problems are solved as long as the main science officer chimes in at the last minute to solve the problem was one of my particular favorites. I enjoyed the pieces of the story, but in the end I couldn’t get past the direction it took. I wanted a fictional solution to the mystery of red shirts dying – something that could be contained inside the narrative without tearing down every brick of the fourth wall. I became more and more dissatisfied with the solution of the Redshirts as I could see where it was headed. Once the idea of redshirts being killed because of bad writers became the solution I lost interest in the story. It just didn’t do it for me.

I’ve read some interviews done with John Scalzi and he is pretty clear that he thinks killing off random characters is bad writing on a TV show. I’m not entirely sure I agree and at the very least it is easy to see how writers back themselves into the corner of killing Ensign Ricky once an episode. These are shows about explorers and the subtext in almost all of them is that space is a dangerous place. People are going to get hurt and are going to be killed by “ice sharks” every now and again. It just isn’t practical to kill of the main characters because they are the draw for the audience.

The book was a quick read and as I said I did like the hidden geeky gems. If you are a Star Trek fan or a Scalzi fan there are much worse books to take on your next vacation. I mean how books have their own song written and performed by Nerd Core legend Jonathan Coulton

For a much more creative review of the book check out David’s post.

One response to “Rosencrantz and Ensign Ricky Are Dead”