This is really good Octopus

We will be checking out of our Tokyo home very soon and I am not sure what the Internet will be like after this. Here is a quick summary of our day at TokyoSea. First we took the monorail from the main train station. 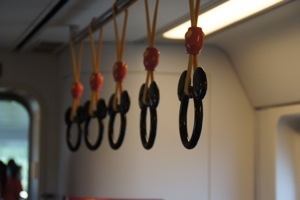 We didn’t really know what to expect for this park, but we got the impression from the map that it was little bit like California adventure. We came later than the day before so wedding not have to wait in line to get in. We walked in through the corridor of shops and when we came out to a big plaza we could see the end of a parade of boats on large lagoon and behind it a very tall mountain. And just as we were entering the Volcano erupted. We were impressed from the start with DisneySea. We strolled through a picturesque replica of Venice on our way to the first rides over in what I am calling Jules Verne land. We grabbed some Fast passes for Journey to the Center of the Earth and rodeo couple of Rides unique to DisneySea. The first a StarrTours-like ride called StormRider where we crashed into the sea. The second ride was called the Aquatopia and it was in Get Wet mode which suited us nicely as the day was just as hot as yesterday.

The Jules Verne part of the park was very cool and I was pleased that all my children new what SteamPunk meant. The best part of the Center of the Earth ride was the walk into the huge tunnel to get to the beginning of the line. They have a version of 20,000 leagues under the sea where we our family all fit in a six person submarine.

Other rides included a Crystal skull version of the Indiana Jones ride and a two story carousel Arabia next to the Agrabah market.

Being wet from the Aquatopia helped keep our spirits up, but we did not want to repeat of our exhaustion from the day before. We had an early dinner in Italy followed by a gondola ride and gelato.

Then one last night at our Ryokan. After some relaxing and with the sounds of the festivals outside we still had no trouble falling asleep.

One response to “This is really good Octopus”