We met Rob, the owner of our Kyoto home, on our first day in Kyoto. It was a brief meeting because we were on our way out for the day and he had students from Princeton arriving to see the house. Rob is a larger than life character wearing a coat and tie on most days. but was dressed down with just a summer jacket in deference to the heat. He seemed distracted when we met him, probably because he was expecting to meet students not tourists. He asked how we liked the house and told us we should crank up the air conditioning. It is fair to say I liked him right away. I was glad a couple days later when he and Janet worked out having dinner together on our last night in Japan.

He met us at the house at 5:30, on time, which Janet claims is unusual and I find easy to believe. It is also easy to believe that Rob is a fixture in this Kyoto neighborhood. He told us that he originally was going to take us to someplace that had “very Japanese food,” but that with the kids he would take us somewhere with more normal food. We walked less than ten minutes and arrived at a place called Bamboo. They clearly knew Rob and led us all back to a private room. They tried to bring us menus, but Rob gave them back telling them to just bring us a variety of things, but nothing too unusual. I’ll see if I can remember the order of the dishes. First they brought out individual western salads with a few leaves of lettuce and a cherry tomato. Very refreshing. Next I think was a Japanese salad of some sort with an unusual neon green, bubbled seaweed in it that looked like it was from another planet. It sort of popped in your mouth, but it didn’t have a strong flavor.

There was some sashimi, tempura, some fried chicken dish, and some beef cubes that melted in your mouth. The dish that stole the show was a platter of little crabs that had been deep fried. 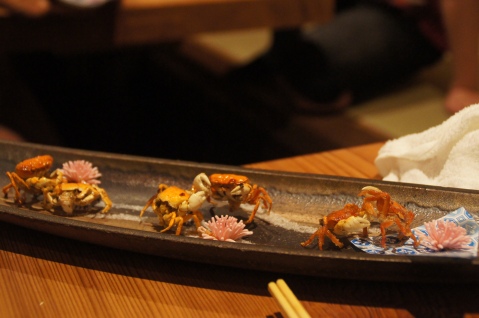 Even Rob was surprised by this dish and he said that the chef was playing a joke on him because he asked for nothing too weird. I was game and popped one in my mouth right away. It was salty and crunchy sort of like a potato chip, although more like you might imagine a fried cricket would taste.

Everyone except Sarah tried one eventually and she probably would have worked up the nerve, but we had already eaten all of them. Melanie and Michael both broke off the legs first to make it seem less weird.

While the food was served Rob regaled us with stories of the movie he is working on, his travels, his phobias, and with some culinary and historical facts about Japan, Kyoto, and the Gion Matsuri. He also gave us a great way to get back to the airport which worked very well for us the next day. After about an hour and a half he apologized, but said that he had to go and meat someone for his second dinner. He told us that “everthing was taken care of” and that there would be some more dishes coming. We had one more shrimp dish after he left just to be polite, but most of us were quite full by this time.

The kids were not so full that we managed to skip our now nightly Lawson’s trip for ice cream and breakfast pastries.

One response to “The Last Yushoku”